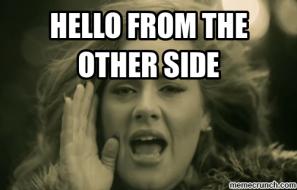 Felt the need to share this image again! It makes me grin.

I often get voice mails from people looking for jobs/connections even when I am not actively recruiting. I remember not-so-fondly when I was consulting at certain companies where I had a serious recruiting load. Ten jobs or more to fill, I knew my voice mail would be filled regularly.

So much so, that there was a point in time (a lengthy point in time) that I could not get to my voice mail messages at all. I actually had to hire someone weekly, to come in and retrieve all voice mails and keep track of them for me on the day I was out of the office. Otherwise, my message box would fill up and reject anything new. Yes, I had to hire a voice mail coordinator!!!!  And it was quite costly. But I was not about to ignore, or had not intended to, any of them. Prioritization was essential in returning the calls. But when people would call 2-3x or more, that mailbox would just get overloaded.

See, as a corporate recruiter especially – one is charged with doing other things and that might often be meetings with hiring managers, conducting interviews by phone and in person, scheduling those interviews, coordinating travel or other logistics for the 2nd and often 3rd round of interviews. As an HR professional, there are many other responsibilities that one might be charged with – that are considered urgent: employee relations issues, new hire processing, employee training and even terminations.

More often than not, I would get to my office in the morning, and my first item was to check my calendar for scheduled interviews – which may indeed be occurring right away. My goal and most often I achieved it – was to at least LISTEN to all the voice mail messages left for me. Write down names, numbers, time left, etc. Make a note if this was a candidate I had already connected with or someone brand new. Or, maybe it was a hiring manager requiring my immediate attention. Nevertheless, so often – by the time I retrieved ALL my voice mails and would hang up the phone, it was already filled again with brand new messages. Calls I could not take because – I was retrieving voice mails!

Now to my point. So often and even not when actively recruiting, I receive voicemail messages that are absurdly long. A lot of hemming and hawing, going on with a career history, stuttering through an explanation of why they called. Worse, when someone was downright rude or sounded entitled – that I had not yet returned their call from earlier in the day. Not as bad but equally frustrating are those messages that are unfriendly or sound like they are talking from a speaker phone and hard to hear. Even worse, when we have to play a message back once or twice, because of a bad connection, low talking or just plain poor communication skills. Believe me, recruiters make notes of all conversations.